Daisy Chaining IR – How To

Daisy chaining IR can allow you to connect the IR systems of 2 devices. This allows IR to pass from one device to another

This does not work for HDMI Mirrored ports.

a) The diagram below shows how you can link two HDA devices, such as an MHUBU86240 and an XTND4K40TPC using a MHUB + XTND Integration Kit 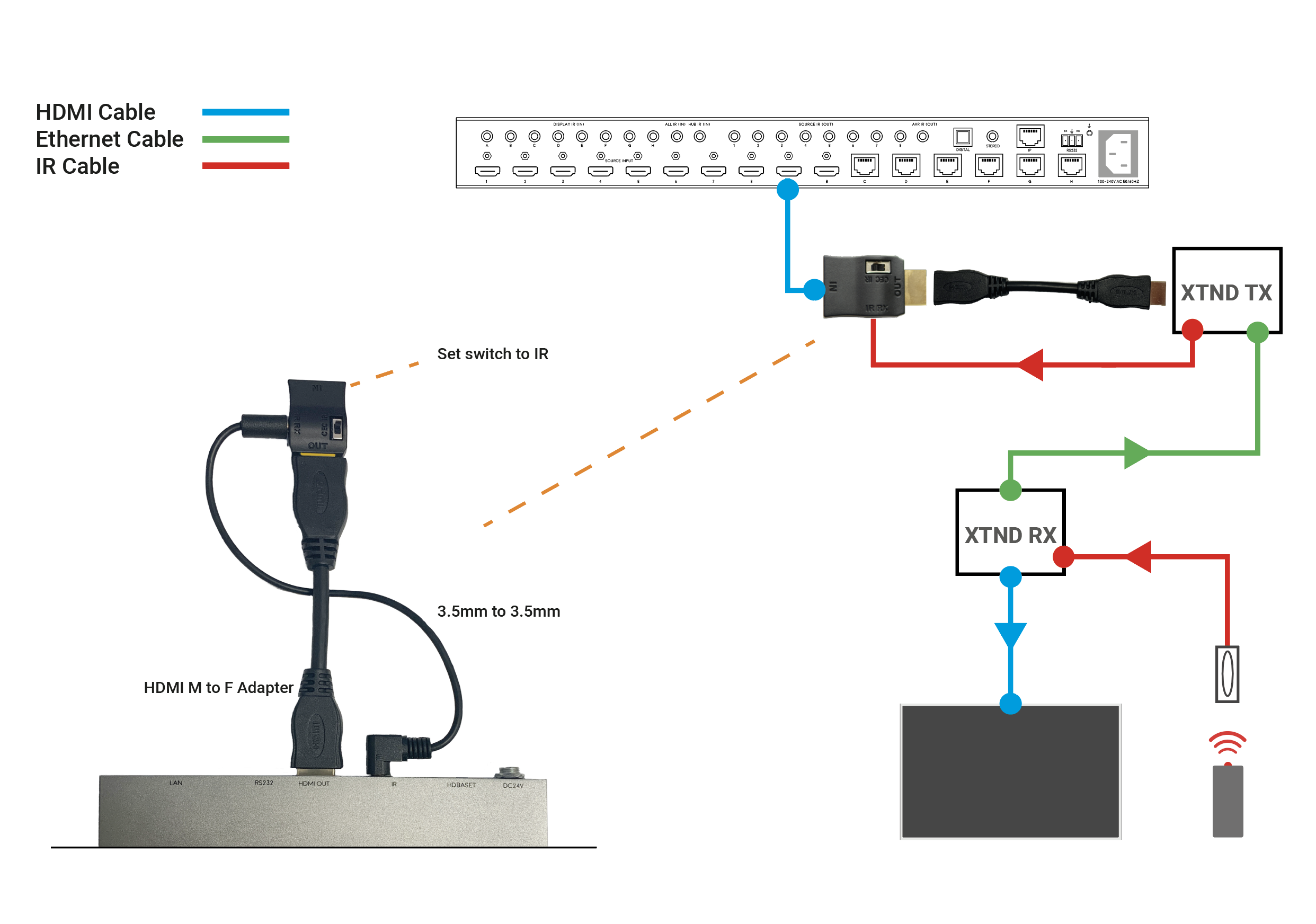 b) This second diagram shows how you would connect a HDA system to a 3RD PARTY extender or device such as a Harmony Remote by Daisy-chaining the IR transmitter from the 3RD party device and the IR receiver included with the MHUB system. 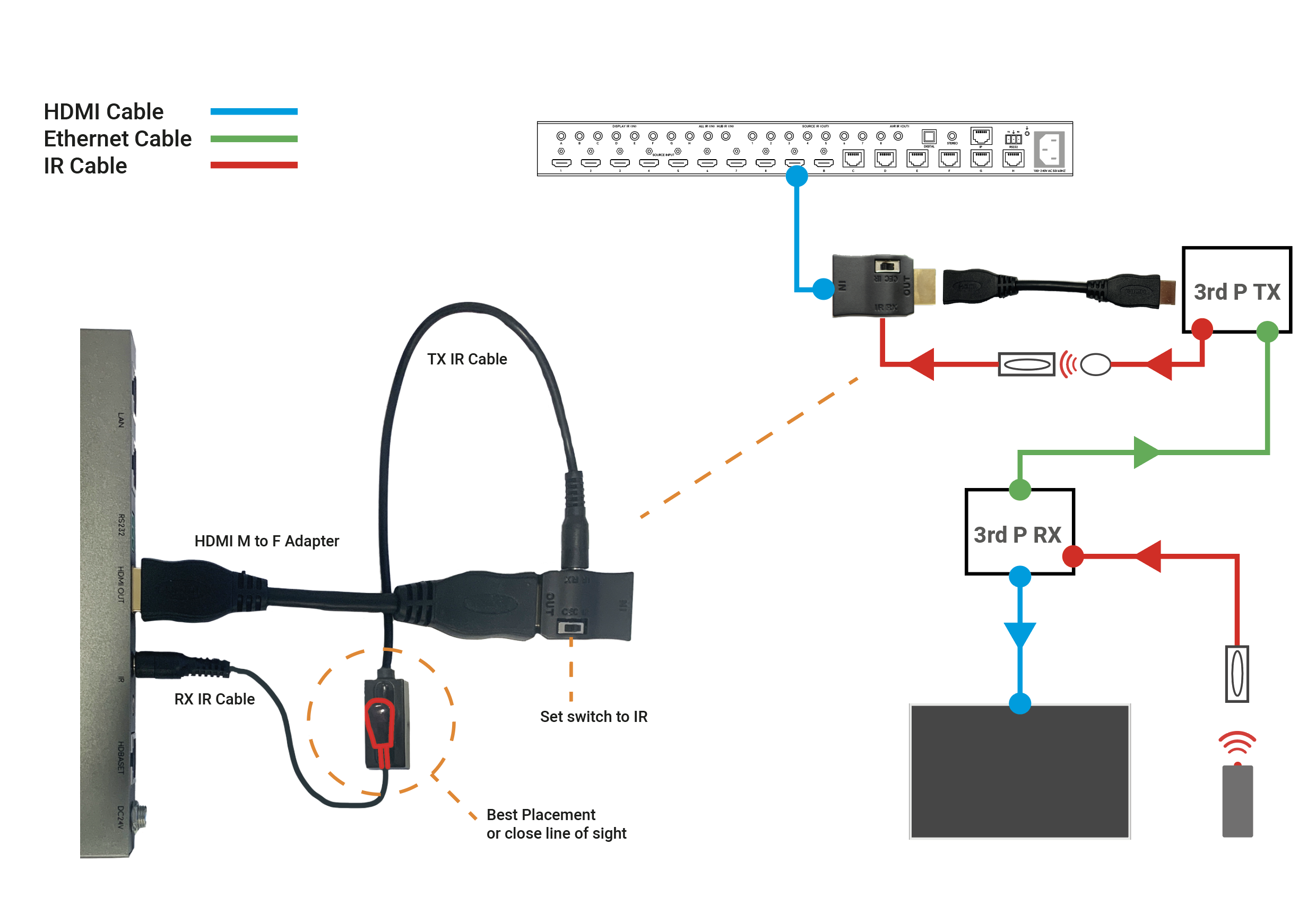 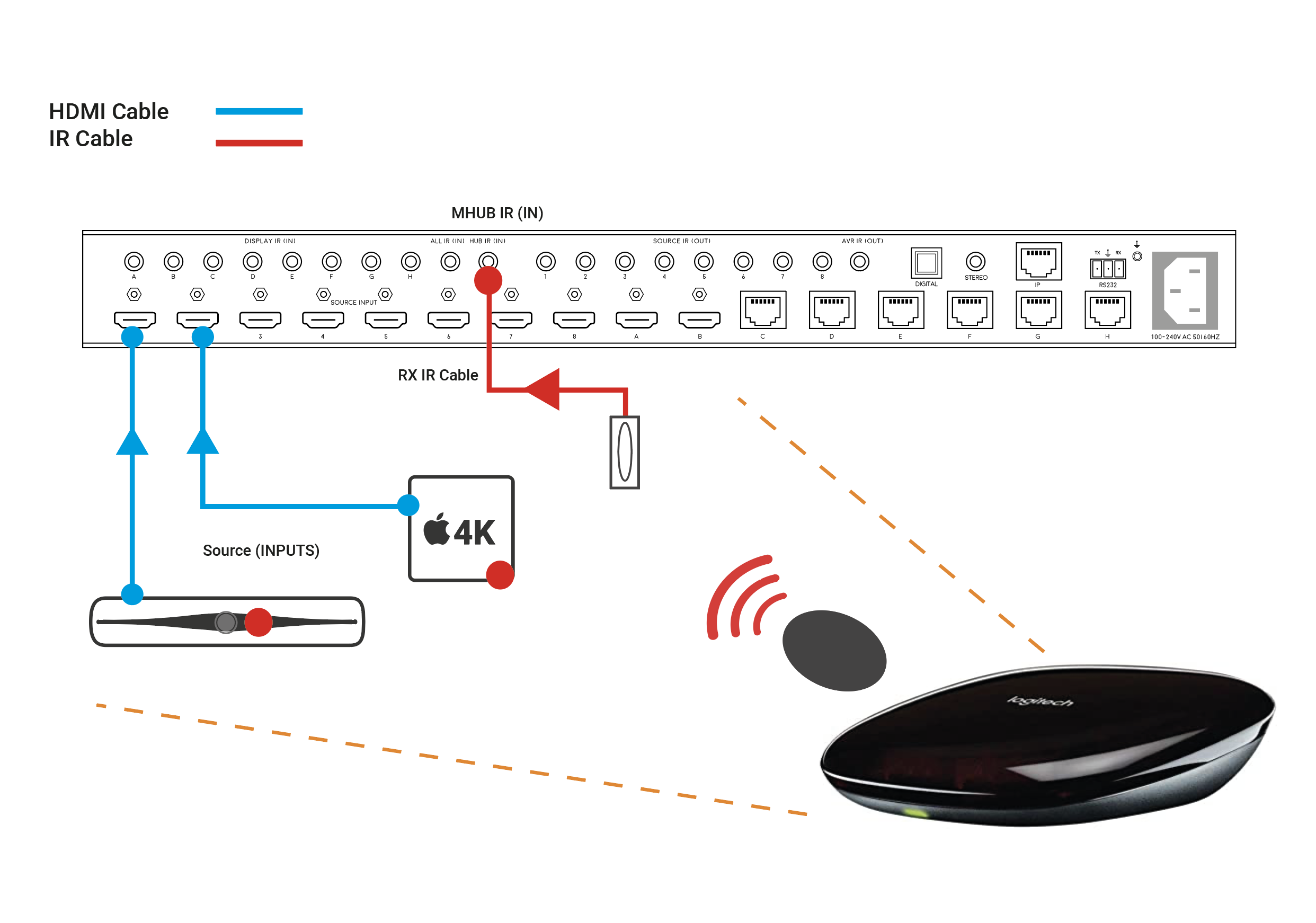 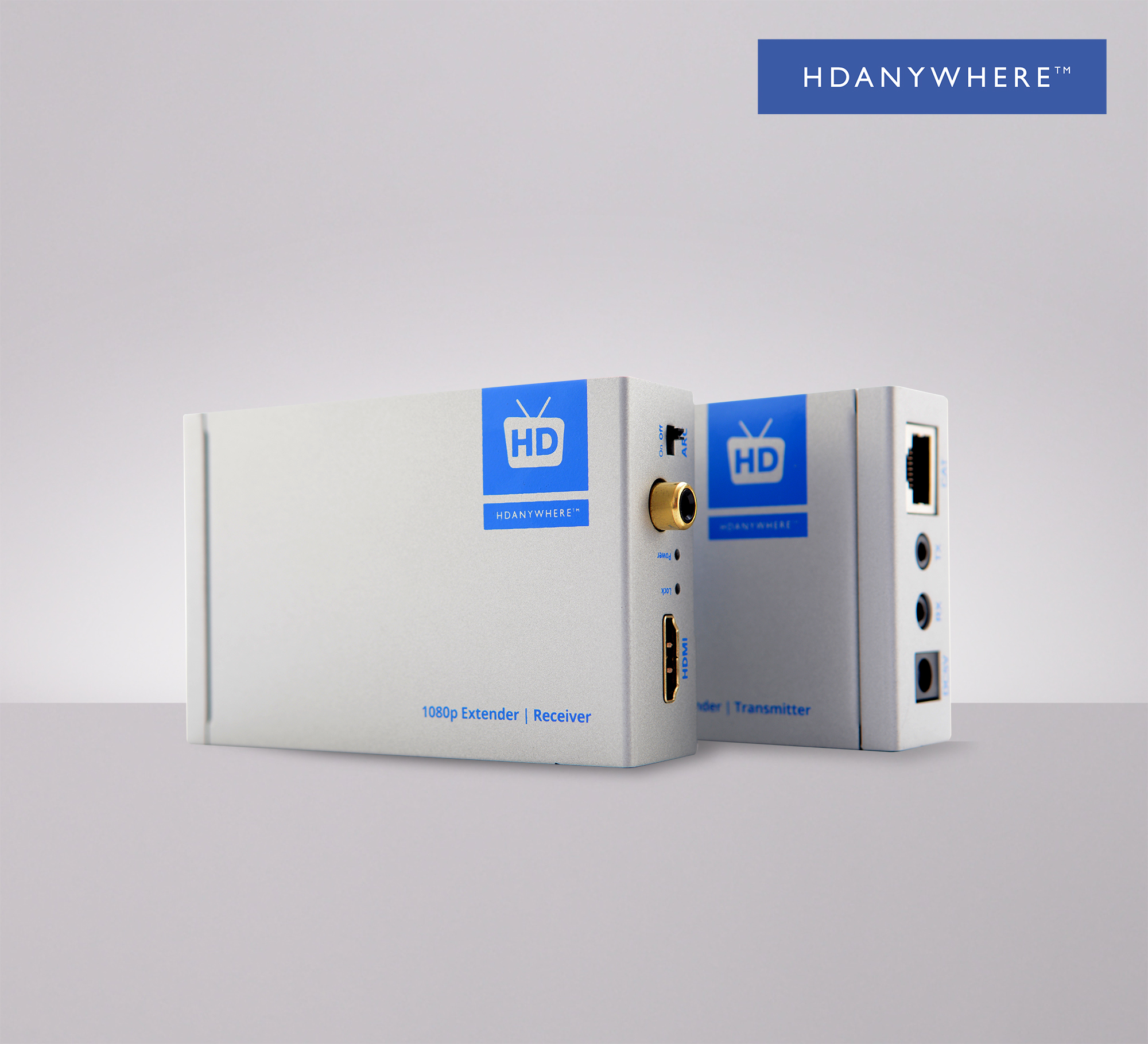 We have recently become aware of a compatibility issue between the EX-50 extender and certain models of Panasonic televisions, which we are currently working hard to resolve.

If you have a Panasonic TV and experience picture drop-out when using IR with the EX-50 HDMI 50m extender set, then please get in touch with us. We have replacement receivers available that don’t suffer from this issue.

If you purchased EX50s directly from HD Connectivity or the HDanywhere website get in touch via email (support@hdanywhere.com) or phone 01684576348. If you purchased it through a distributor (including AWE, ACE or Unicam) then please contact them directly.

HDanywhere 2K systems, such as the mHub 2K family, require a single network cable to be run from each HDTV location, back to a central point.

HDanywhere 2K systems use HDMI over Cat technology to transmit over a single Cat5e/6/7 cable up to a 50 metre distance.

END_OF_DOCUMENT_TOKEN_TO_BE_REPLACED

HDMI 2.0 was unveiled to the world at IFA Berlin in September.  Following this, Aussie company Kordz, stocked in the UK by HD Connectivity, became the first approved HDMI 2.0 Adopter in the world, outside of the HDMI Forum, and is the only HDMI 2.0 Adopter in Australia.  Founder David Meyer lifts the lid on the key features, inner workings and potential pitfalls of this new specification.

Each time a new version of HDMI is announced, there follows a buzz of new features and formats, but also a groan from the custom installation community as to what the implications may be.  HDMI 2.0 paves the way for some fantastic new video and audio capabilities, but no need to panic – the changes may not run as deep as you might think.  Ultimately HDMI 2.0 will settle into a place of normality, as has happened with every iteration before it.

So what does HDMI 2.0 offer, how is it different, and what are the headline features that you need to know about?  Let’s take a look.

HDMI 2.0 is the first major HDMI specification release since version 1.4 back in 2009, so it’s fair to say a lot has changed, and it needs to.  There are now two HDMI organisations;

An important point to note is that HDMI 1.4b remains as an ongoing specification, with HDMI 2.0 running concurrently with its subset of additional optional features and enhancements.  Existing HDMI Adopters do not automatically get an upgrade; they must sign an addendum and be accepted before they can become adopters of HDMI 2.0.

Here’s a summary of some of the key new features of HDMI 2.0;

In this article we’ll focus on 2160p, touching on anamorphic, but coming back to explore audio some other day.

The first key new feature of HDMI 2.0 out of the gate is the upgrade of 2160p (4K) to 60 frames per second within the existing defined HDMI bandwidth, where previously it was limited (under HDMI 1.4) to 30fps.  Both Sony and Panasonic have recently announced firmware updates for their existing 4K TVs to enable this feature, indicating that there is no new hardware (aka ‘speed’) required.  As an aside, they tend to tout this upgrade as “HDMI 2.0”, but that’s a non-compliant practice as it’s actually just one of a multitude of new features of HDMI 2.0 that they’re talking about.  What they really mean is that the firmware just adds newly defined support 2160p/60, 8-bit 4:2:0… assuming the existence of content.

So how is it possible to double the frame rate without doubling the bandwidth?  The answer lies in the ‘…8-bit 4:2:0’ reference; save on colour data, give back in frame rate.

Chroma subsampling is a process of compressing, or rather stripping out colour data to reduce file size &/or video transmission bandwidth load.  The premise is that the human eye is far less sensitive to colour than in is to brightness and grayscale, by a factor of 20, in fact.  As such, the amount of colour information in video can potentially be reduced without us really noticing… or that’s the plan.

The trick is to leave the resolution and gray scale untouched, which is why it’s only applicable to Component video (YCbCr) signalling, where the separate luminance (Y) channel can be left intact.  The most common chroma subsampling methodologies are 4:2:2 with half colour data when compared to 4:4:4 original, and then there’s 4:2:0 (as used with DVD & Blu-ray) with just one quarter of the original colour data.

The sampling commonly occurs over a 2×2 pixel array, where each pixel comprises a Luminance channel (Y) and two Chrominance channels (Cb & Cr).  Fig.1 below shows a simplified depiction of the uncompressed array before any subsampling, called 4:4:4.  Fig.2 shows how HDMI 1.4 (and prior) handles YCbCr, where everything from 8-bit 4:2:0 to 12-bit 4:2:2 produces precisely the same bandwidth at a constant 96 bits per array (same as 8-bit 4:4:4).  Fig.3 depicts 4:2:0 as it really should be, being how HDMI 2.0 handles it; with 8 bits of ‘Y’ per pixel, and just one of each 8-bit colour component Cb & Cr across the whole 2×2 array.

What they’ve done with HDMI 2.0 is recognise that 8-bit 4:2:0 natively nets 48 bits per sample array, and they’ve actually passed on the savings.  That is, they halve the bandwidth, which enables them to then double it again with frame rate.  Voila, 30fps goes to 60fps in the same bandwidth as before.  Note this is ONLY applicable to 8-bit 4:2:0.  This is not where HDMI 2.0 stops – there’s even better formats on the horizon.

There are several formats of 2160p (4K) that are included in the HDMI 1.4 specification, all of which run at 8.91Gbps, the specification then capping out at 10.2Gbps.   HDMI 2.0 introduces some more at this legacy level, and several superior combinations at double this rate, being 17.82Gbps (rounded to 18Gbps, 6Gbps/ch).  This is well beyond the limits of HDMI 1.4, and defines the top end of HDMI 2.0.  The range above 10.2Gbps is referred to as “HDMI 2.0 mode”, whereby the TMDS Clock is slowed to 1/40th of the data rate to counter the effects of EMI at such high speeds.  Other techniques like data scrambling are also employed to improve stability.

Right off the bat – THERE IS NO SUCH THING!  If anyone offers you so-called “HDMI 2.0 cables”, turn and run.  It will be either a marketing tactic, or expression of ignorance.  Either way it’s non-compliant.  When the HDMI 2.0 specification was first announced, it was accompanied by this statement;

There is no new speed, no new cable.  Does it make sense that a cable rated to 10.2Gbps can then carry up to 18Gbps?  Logically no, but they have some tricks up their sleeve.  2.0 introduces a parametric-like new sink EQ system which supposed to make a 10.2Gbps tested cable perform up to 18Gbps.  It can’t however fully compensate for the collapsing effect of cable length, and will be expected to cap out at around 3m with a decent cable.  Beyond that, it’s all bets off and there is no new cable spec, speed or directive.  My prediction – HDMI cables will have to turn active, as some already have.

What HDMI 2.0 has introduced is the ability for content to be formatted using 4:3 pixel ratio.  Every pixel in a supporting display could potentially be fed 4:3 anamorphic content, even though the pixel is still 1:1 square.  In practice, a projector with a matching anamorphic lens will horizontally stretch the image by 1/3 (4:3).  The result is 2.37:1 picture aspect ratio (1.78/3)x4 = 2.37.

No more encoded black bars.  It means we can look forward to maximising image resolution for cinemascope 2.37:1 in a standardised format.

HDMI 2.0 brings many benefits and some exciting new features, paving the way for a level of AV immersion the likes of which we’ve never seen.  Yes it means new hardware, but that points to opportunity for the custom AV dealer/installer.  HDMI speeds are ever increasing, and that means more demand on quality infrastructure to ensure everything works as planned.

Imagine a premium 2160p/60 2.37:1 aspect home cinema projection system with brilliant 12-bit 4:2:2 colour and 10.2 audio system.  How about dual-view gaming with 2 players each experiencing their own full screen 1080p image on the same TV, with separate audio tracks being fed to their headphones?   Or to really make your head spin, imagine an IMAX Private Theater ™ with 30.2 channel 3D digital sound.  Phwoah!

As an installer tasked with distributing HDMI signals over Category 5e/6 cable, it is useful to understand some crucial elements that makeup the HDMI signal. How it leaves the transmitter and ideally how it should still look when the receiver receives it.